Does the thought of rugby terrify you? Have you always thought of it as a reckless and dangerous sport that can only lead to injury? There’s definitely an art to how you play rugby and the training and skills in rugby can overlap with similar techniques in football and other contact sports.

As a former professional rugby player, I’m familiar with tackling techniques and the dangers of concussions that come with playing these high-intensity sports. You need to learn from an early age how to protect yourself or you’re going to get taken out the game pretty quick…

A recent study has been conducted by two Marshall University professors with some unique results. They’ve been studying tackling and how the different styles of tackling affect athletes and their concussion rates. In other words, it’s a very relevant study to everything we’re doing here at Tackle Smart Sports.

This study has shown that ‘rugby-style’ tackling has been proven to give athletes fewer concussions than traditional, football styles of tackling. You might be sitting behind your computer right now thinking, ‘No way… Rugby is a dangerous, crazy sport, nothing like football. They don’t even wear helmets!’

I can stop you right there because helmets are only truly effective in helping with superficial wounds. They don’t stop your head from rattling around which is what’s going to cause your concussion in the first place.

But if that’s the case, and if rugby is such a ‘dangerous’ sport, then why aren’t rugby players getting concussions at the same rate as football players?

This is exactly the question that Dr. Suzanne Konz and Dr. Zach Garrett set out to answer. And the answer they got was that rugby-style tackling is safer and more effective for all players. During the study, football players actually started changing their techniques to rugby-style tackling simply because of the results of the study. They could see that this style of tackling was better for them, so they were making the switch.

It’s time for us to start teaching boys from a young age, how to tackle smarter. If we changed our focus to tackling instead of new helmet designs, we could significantly reduce the number of concussions that our players are having.

The difference is, rugby players are practicing these methods repeatedly from an early age. From the beginning of their training, they’re learning how to remove their head from contact and it’s this muscle memory that’s making them protect their heads as second nature during the game. We don’t teach our boys that in football. Instead, we have them believing that their heads are ok, as long as they’ve got their helmet on.

But this idea of ‘Rugby-Style’ can be terrifying for people. Because they hear the words rugby and they immediately think of a dangerous and unsupervised sport. It’s stopping real progress from being made for safer methods of tackling. We can’t let the industry hide behind a fear of dangerous rugby. We need to teach people about rugby-style tackling, why it’s safer and how we can implement it in football from an early age.

Practicing this new skill takes time. You want this to be muscle memory. Second nature for you. And in order for that to be the case, you really need to start practicing today. Rugby-style tackling can change the way that you play the sport. It can keep you on the field longer, playing harder and ultimately keep you doing what you love for more time. Because you’re taking your head out of the tackle.

The Seattle Seahawks went to 2 Superbowls using rugby-style tackling as the basis of their defensive program but it took them 4 or 5 years to get there. During that time they had the most successful defense and the fewest concussions.

What does rugby-style tackling look like though? Like we said above, it’s about removing your head from the tackle, therefore better protecting your brain. This can be seen in the following image. 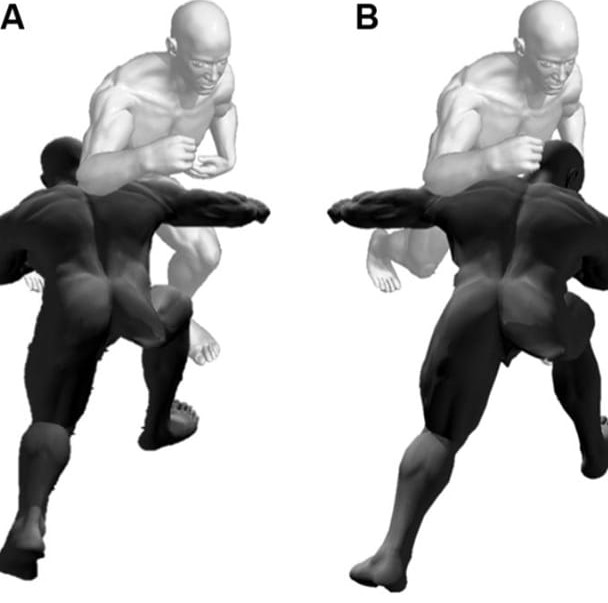 You can see that the player in example A has removed their head from the tackle. This is the method of rugby-style tackling. Where in example B, the player’s brain is taking the force of the ball carrier, resulting in a concussion. Here you can start to see the difference in these tackling methods that we are teaching at Tackle Smart Sports.

The proof is there. Dr. Suzanne Konz and Dr. Zach Garrett have realized it and now it’s your turn. Learn more about Smarter Tackling with Tackle Smart Sports!